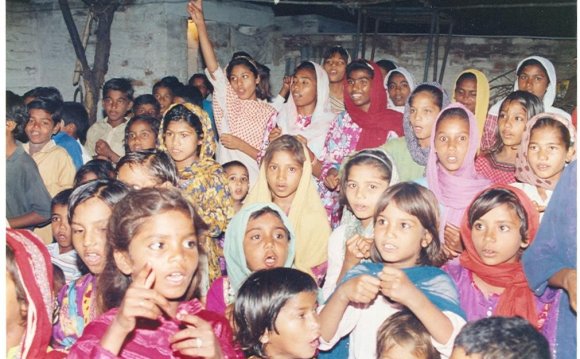 The Christian Broadcasting Network (CBN) grew from the vision of one man, Pat Robertson, who in 1960 bought a run down UHF station in Portsmouth, Virginia for a mere $37, 000. While many religious broadcasters relied on sermons to convey their message, Robertson developed a talk show approach on his new station, in which interviews, music, teaching, prayer and healing were all provided in a smoothly produced program format. CBN's first telethon to raise funds in the fall of 1963 was named The 700 Club because Robertson asked for 700 people to pledge $10 a month to support the new station and keep it on the air. This became the name of Pat Robertson's religious talk show; he became host for the show, and a former Black Muslim Ben Kinchlow became co-host; the show is still running more than thirty years later.

Three innovations adopted by CBN helped the fledgling network grow rapidly to into one of the biggest religious broadcasting networks in the world. The first innovation was CBN's use of the telephone to provide ongoing contact with viewers. The 700 Club provides a telephone number on screen so that viewers can call to ask for prayer and counseling during and after each program. Viewers responded warmly to this semi-interactive relationship with the 700 Club hosts; the hosts would write personalized follow-up letters to those who called. In 1979 sixty counseling centers across the nation were established to respond to calls 24 hours a day. By 1992 over forty million calls had been received; now in 1995 an average of a million calls a year have enabled CBN to meet the spiritual needs of millions, while at the same time, updating its data base of supporters. CBN's second innovation was to follow the lead of HBO and CNN and build its own satellite earth station as early as 1977. When CBN first started buying time on network affiliate stations, it had to transport videotapes of the 700 Club episodes from station to station, which meant programs were usually days and sometimes weeks old by the time they were broadcast. This new satellite technology enabled CBN to transmit the shows live across the nation either for immediate broadcast, or for rebroadcast later.

CBN's third innovation was to provide 24 hour religious programming to the nation's growing network of cable stations. By 1980 the Continental Broadcasting Network, an alternative name for CBN Cable, provided a 24 hour satellite tv service reaching more than 5 million homes; cable operators were paid a few cents per month per viewer for providing a religious cable channel in their area. CBN Cable moved to become an advertiser-and-cable-system-funded family entertainment channel with limited religious programming. On 1 August 1988 CBN Cable changed its name to the Family Channel; two years later CBN sold the channel to International Family Entertainment to satisfy IRS requirements so that CBN would retain its tax exempt status.

CBN claim that the transaction provided them with more than $600 million in total benefits-everything from cash to airtime. IFE became a publicly held 150 million dollar company when traded on the New York Stock Exchange in 1992. Effectively a small UHF religious station has become a cable programming giant in thirty years.

In 1980 The 700 Club changed format from an all religious show to a contemporary talk show with news elements, based on news bureaus in Virginia Beach, Washington DC, and later in Jerusalem, Israel. USam, a morning news show, began in 1981 but was withdrawn after a year. Another Life, a daily soap opera featuring the adventures of a Christian family ran for 800 episodes from 1981 to 1984, and still airs in many countries around the world. Perhaps the most successful productions were the two animated bible story series Superbook and Flying House. These two series were syndicated worldwide and when broadcast in Russia and the Ukraine in 1991 produced more than eleven million requests for gospel literature.

Program content on the 700 Club stresses a biblical worldview, based on the belief that there exists a set of moral absolutes revealed in scripture that should undergird society's institutions, laws, and public policy. Like other Conservative Christians Robertson sees certain Supreme Court decisions in the 1960s as paving the way for a moral and spiritual decline in American society, and blames secular humanism as the source of the corruption and godlessness that leads to the social ills like abortion and the break-up of traditional families.