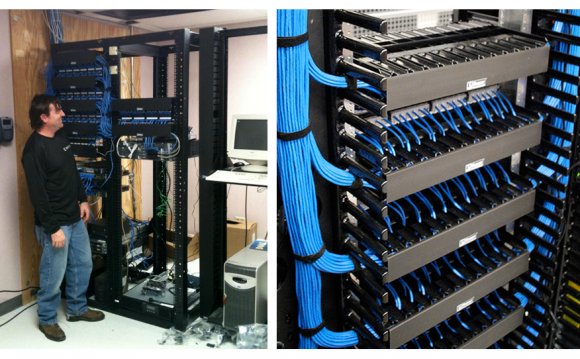 More than 210, 000 users have watched a YouTube video of our data center operations team cabling a row of server racks in San Jose. More than 95 percent of the ratings left on the video are positive, and more than 160 comments have been posted in response. To some, those numbers probably seem unbelievable, but to anyone who has ever cabled a data center rack or dealt with a poorly cabled data center rack, the time-lapse video is enthralling, and it seems to have catalyzed a healthy debate: At least a dozen comments on the video question/criticize how we organize and secure the cables on each of our server racks. It's high time we addressed this "zip ties v. hook & loop (Velcro®)" cable bundling controversy.

The most widely recognized standards for network cabling have been published by the Telecommunications Industry Association and Electronics Industries Alliance (TIA/EIA). Unfortunately, those standards don't specify the physical method to secure cables, but it's generally understood that if you tie cables too tight, the cable's geometry will be affected, possibly deforming the copper, modifying the twisted pairs or otherwise physically causing performance degradation. This understanding begs the question of whether zip ties are inherently inferior to hook & loop ties for network cabling applications.

That conclusion is contrary to the prevailing opinion in the world of networking that zip ties are evil and that hook & loop ties are among only a few acceptable materials for "good" network cabling. We hear audible gasps from some network engineers when they see those little strips of nylon bundling our Ethernet cables. We know exactly what they're thinking: Zip ties negatively impact network performance because they're easily over-tightened, and cables in zip-tied bundles are more difficult to replace. After they pick their jaws up off the floor, we debunk those myths.

The first myth (that zip ties can negatively impact network performance) is entirely valid, but its significance is much greater in theory than it is in practice. While I couldn't track down any scientific experiments that demonstrate the maximum tension a cable tie can exert on a bundle of cables before the traffic through those cables is affected, I have a good amount of empirical evidence to fall back on from SoftLayer data centers. Since 2006, SoftLayer has installed more than 400, 000 patch cables in data centers around the world (using zip ties), and we've *never* encountered a fault in a network cable that was the result of a zip tie being over-tightened ... And we're not shy about tightening those ties.

The fact that nylon zip ties are cheaper than most (all?) of the other more "acceptable" options is a fringe benefit. By securing our cable bundles tightly, we keep our server racks clean and uniform:

The second myth (that cables in zip-tied bundles are more difficult to replace) is also somewhat flawed when it comes to SoftLayer's use case. Every rack is pre-wired to deliver five Ethernet cables — two public, two private and one out-of-band management — to each "rack U, " which provides enough connections to support a full rack of 1U servers. If larger servers are installed in a rack, we won't need all of the network cables wired to the rack, but if those servers are ever replaced with smaller servers, we don't have to re-run network cabling. Network cables aren't exposed to the tension, pressure or environmental changes of being moved around (even when servers are moved), so external forces don't cause much wear. The most common physical "failures" of network cables are typically associated with RJ45 jack crimp issues, and those RJ45 ends are easily replaced.

Let's say a cable does need to be replaced, though. Servers in SoftLayer data centers have redundant public and private network connections, but in this theoretical example, we'll assume network traffic can only travel over one network connection and a data center technician has to physically replace the cable connecting the server to the network switch. With all of those zip ties around those cable bundles, how long do you think it would take to bring that connection back online? (Hint: That's kind of a trick question.) See for yourself:

The answer in practice is "less than one minute" ... The "trick" in that trick question is that the zip ties around the cable bundles are irrelevant when it comes to physically replacing a network connection. Data center technicians use temporary cables to make a direct server-to-switch connection, and they schedule an appropriate time to perform a permanent replacement (which actually involves removing and replacing zip ties). In the video above, we show a temporary cable being installed in about 45 seconds, and we also demonstrate the process of creating, installing and bundling a permanent network cable replacement. Even with all of those villainous zip ties, everything is done in less than 18 minutes.

Many of the comments on YouTube bemoan the idea of having to replace a single cable in one of these zip-tied bundles, but as you can see, the process isn't very laborious, and it doesn't vary significantly from the amount of time it would take to perform the same maintenance with a Velcro®-secured cable bundle.

Tools needed and use for network cabling either at the ...

How to make a patch cable for network cabling Part 1 of 2 ...