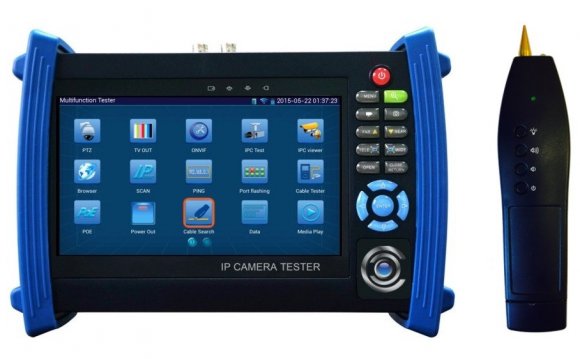 The CAT-5 / network cable tracer is another great tool built into the MON-IP7 and MON-7HD IP camera and CCTV camera test monitors. The network cable tracer can be used to track down both ends of a CAT-5 cable run. This is especially useful in large network installations and installation where cables have not been properly labeled. The tool uses a tone probe that is included with the monitor. The cable is traced by connecting one end of the cable via RJ-45 to the test monitor and pointing the probe at the other end. An audible ring sounds when the signal from the monitor is detected.

To use the Cable Search feature, first connect one end of the Cat-5E cable to the UTP port of the test monitor. (Shown Below)

Then, select the Cable Search icon. (Shown Below)

Now you will have four tone selections to choose from. The one you choose does not make a difference in performance, it is just an audio preference. (Shown Below)

Make sure that the Tone Probe tool is on by pressing the power button, you will see a green light when it is on. On the other end of the cable (opposite the monitor), use the Tone Probe to test the cable by touching the metal tip to the cable. If you hear an audible ring, then you have located the cable that is connected to the test monitor. If you do not hear an audible ring, then either you have the wrong cable (a cable not connected to the monitor) or there is a break somewhere along the cable run. The Tone Probe tool also has a built-in flashlight for dimly lit spaces or data rooms. (Shown Below)