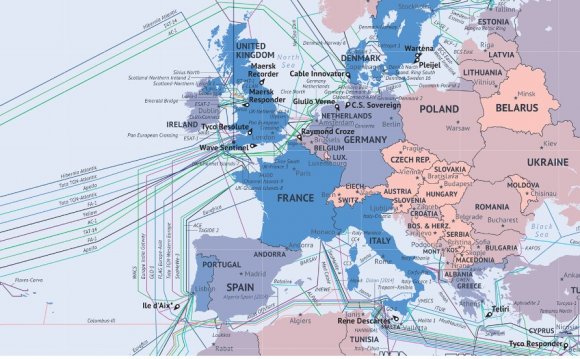 The old saying goes that there’s more than one way to skin a cat, and that holds true for the NSA and the way it eavesdrops on global communications. In the latest round of leaks from Ed Snowden, the world’s most wanted ex-contractor reveals that it’s not just tech companies like Google and Microsoft that are willingly collaborating with the spooks – they’re also quite capable of helping themselves, tapping into the “internet’s backbone, ” and siphoning off vast amounts of data from the undersea cables that make the web go round.

A report in The Atlantic details how British spies are running two rather blatant-sounding programs going by the names of “Global Telecoms Exploitation” and “Mastering the Internet”. The programs are said to be similar to PRISM, and fall under a larger operation called “Project Tempora”. According to documents leaked by Snowden, Tempora gathers up a seemingly ridiculous 21 million gigabytes of data every single day, which is then retained and analyzed for one month.

The Atlantic describes how this data is then shared between Britain’s GCHQ and the NSA, with more than 550 analysts working full time to sift through it all. In this case though, the risk towards our privacy is even greater than anything the NSA collects via PRISM, because tapping into undersea cables means that the agencies can gather the entire contents of communications, rather than just the metadata.

Speaking to security analyst Jacob Appelbaum, Ed Snowden relates how the GCHS is even “worse than” the NSA, because its system vacuums up all data indiscriminately, regardless of who it belongs too or what the content of that data is.

“If you had the choice, you should never send information over British lines or British servers, ” stated Snowden.

The actual method through which GCHQ captures this data is still a matter of debate, although The Atlantic suggests that it probably involves some kind of “intercept probes” that are installed at various landing stations in the UK.

These ‘intercept probes’ are said to be small devices capable of capturing the light sent down a fiber optic cable, bouncing that light around a ‘prism’, copying it, before allowing it to continue on its merry way.

A US government contractor called Glimmerglass is likely to have provided at least some of the technology that allows GCHQ to do this. Aviation Week reported that the company was carrying out similar interceptions on behalf of the US government back in 2010. Further, Glimmerglass has previously boasted of being able to monitor traffic of services including Facebook and Gmail, and is said to have sold its technology to several governments.

“We believe our 3D MEMS technology — as used by governments and various agencies — is involved in the collection of intelligence from … undersea fibers. “We are deployed in several countries that are using it for lawful interception. They’ve passed laws, publicly known, that they will monitor all international traffic for interdiction of any kind of terrorist activity.”

This is all thought to be fairly recent technology however. Previously, the only way that undersea cables could be accessed was by tapping into them directly. To fulfil this purposes, the USS Jimmy Carter submarine was apparently repurposed for the job. The sub apparently accesses the cables at “regeneration points”, where their signal is amplified and where the cables are no longer bundled, but can be accessed individually.