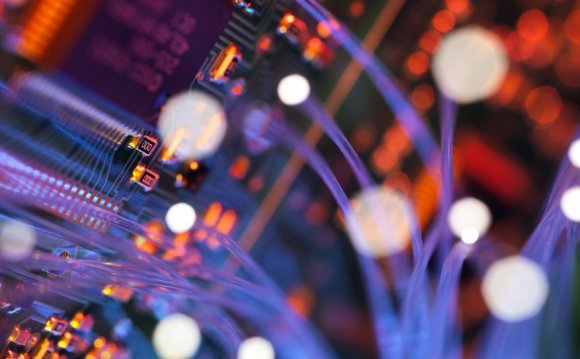 So, that Internet apocalypse that’s going to befall us when our fiber optic cables max out? Maybe not so much. On Thursday, engineers reported in that they’d broken the “capacity limit” for fiber optic transmission, opening the door to future networks that carry more data further at lower costs.

As the world’s collective Internet demand continues to skyrocket, electrical engineers have been keeping pace by upping the signal that passes through our fiber optic cables, allowing us to send and receive more juicy data faster. But optical fiber transmission has certain physical limitations. If you boost the power too much, the beams of laser light that carry data start interfering with one another, until eventually, the signal degrades and information is lost.

Whispers of a so-called capacity crunch—a singular moment when the cables simply can’t spit out our cat videos any faster—have taken on a louder, more alarmist tone recently. Some experts have gone so far as to suggest the Day of Reckoning might be upon us in as little as five years.

Which is why the recent breakthrough is so timely. In experiments performed at UC San Diego’s Qualcomm Institute, electrical engineers were able to increase the power of optical signals nearly 20 fold, deciphering information after it had travelled a record-breaking 7, 400 miles, without the use of costly electronic regenerators.

In optical fibers, information is transmitted via carriers that operate across a range of different frequencies. As we beam more laser light through our cables faster, the amount of “crosstalk, ” or interference, between these carriers goes up. (Imagine a person shouting down a long corridor, his voice echoing and distorting with increasing distance. Similar idea.) Eventually, we reach a point where the signal becomes so distorted that it can’t be decoded at the other end.

To break that distortion-induced capacity limit, the researchers developed wideband “frequency combs” that essentially condition streams of information before they’re sent out, such that any interference that occurs along the way is predictable. At the receiving end of the fiber, the information can unscrambled and fully restored.

Said Nikola Alic of the Qualcomm Institute, a lead author on the new Science paper:

Today’s fiber optic systems are a little like quicksand. With quicksand, the more you struggle, the faster you sink. With fiber optics, after a certain point, the more power you add to the signal, the more distortion you get, in effect preventing a longer reach. Our approach removes this power limit, which in turn extends how far signals can travel in optical fiber without needing a repeater.

There’s a lot more work to be done before this development translates into real world Internet improvements, but it’s a promising step toward a future where optical networks carry our data faster and at significantly lower costs than today. Once again, clever engineers are showing the world that most limits are actually in our imaginations. Meanwhile, the Internet lives on.