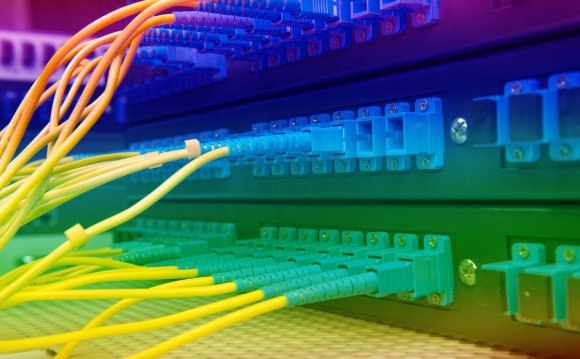 Your data center is the heart that pumps the lifeblood of your business. Without it, everything stops. And when it has problems, so does your business. Myriad issues can plague a data center. And although most people don't realize it, improper cabling can be one of those issues. But with some easy planning and work up front, you can maximize the efficiency and reliability of your data center cabling.

I have put together 10 tips to help you get the most out of your data center's cabling. With these tips, you'll have a more reliable data center and your staff will have a much easier time maintaining it.

It's an old adage, but an important one. Not only do you create a tangled mess if you don't carefully measure your cables, you also create a lot of expensive waste. You may think that two feet of wasted cable doesn't amount to much, but those wasted feet add up. In the end, you could save yourself a lot of time, headaches, and money by measuring twice and cutting once.

If you don't label your cables, you're only making more work for yourself. Every cable should have a label on both ends, even short runs and patch cables. Why? Imagine you have to test a bunch of circuits — quickly. You scramble and unplug a few patch cables and, when it's time to reset them back to their default locations, you have no idea where each cable goes. Avoid this problem by taking a little time to slap a label on each end. Make sure your labeling system is consistent. Don't just go ad hoc with this or you'll confuse yourself and those who work for you.

Don't buy cheap because they're cheap and don't rush through the process of terminating cables. If you have cables that lose their connection if you wiggle them, you need to redo them. If you can't terminate cables in your sleep, you need to practice. You may think you're saving time and money. But in the end, you're going to wind up with a monstrous headache as you troubleshoot all those terminations.

After you create a cable, test it! And don't accept "Star Pass" tests (a test that barely passes). If a test doesn't pass 100%, redo that cable. If, after a few tries at termination, the cable still doesn't pass, trash it. And make sure you're using a quality tester for your cables (and that you know precisely how to use it). This simple step can prevent a lot of extra work in the end.

You have servers in a rack that are within a foot of each other. Don't slap three-foot patch cables on those servers — it not only looks bad, it's incredibly inefficient. And if you have an odd length between servers, use your termination (and testing) skills to create patch cables that reach perfectly. With that extra length on your cables, you invite tangles, kinks, and confusion.

This may sound a bit over the top, but stick with a single color for your patch cables and cable runs. The only time you should break that rule is when using a specific color cable for a specific purpose. But don't use colors randomly. Make sure each color has a purpose and stay with it. That will make it easier to follow cable runs and troubleshoot issues. And yes, it also makes for a better-looking data center — which has its merits.

When you lay out your data center plans, do so in a cable-friendly way. Don't put a rack in a location where it's impossible to successfully run cable. Otherwise, you'll wind up with cable on the floor or hanging from the ceiling. Plan carefully to avoid later disaster. Also make sure to plan with expansion in mind. Run extra conduit, extra drops — more than you think you'll need.

Do not run Cat5 and power together. You might think it's too minimal to be of concern, but those power lines can leach signal and cause interference with your Cat5. Yes, bunching a lot of Cat5 together can do the same thing, but not with nearly the ill effect of running them alongside power. Keep power and networking separate at all costs.

You may think only the servers need to be cool — but that would be a poor assumption. Cable can get warm as well, and if you have a massive amount of cable, that extra temperature can lead to disaster. Design your data center in such a way as to keep your networking runs cooled, as well as the server racks.

Cabling is often an afterthought. But when you treat it as such, you are running the risk that you'll find yourself elbow deep in a spaghetti bowl of networking cables, attempting to resolve issues that could have been prevented with just a bit of care up front.

How To: Cable Management